Announcing the publication of a new book, Country Music's Greatest Lines: Lyrics, Stories & Sketches from American Classics, written by Bobby Braddock, with over 80 illustrations by yours truly. We are so excited to have our hard work come to fruition! 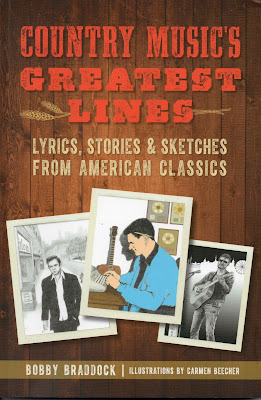 Bobby Braddock is a longtime friend, and a member of the Nashville Songwriters Hall of Fame, the Country Music hall of Fame, and the Songwriters Hall of Fame in New York, with many notable hits, such as “Time Marches On,” “He Stopped Loving Her Today,” “Wanna Talk About Me,” and “People Are Crazy.” Braddock is the only living person to have #1 songs in five consecutive decades. Also notable, he discovered Blake Shelton and produced several #1 one hits with him. Naturally, when he presented his idea for the book I jumped at the chance to illustrate it.

Available July 6 on amazon.com and arcadiapublishing.com, the book gives an insider's view of classics from Hank Williams, Roger Miller, Kris Kristofferson, Taylor Swift, Eric Church and more, and spans decades from the 1940s to present.

To quote Bobby: “ By featuring songs and song lyrics that span the early days of country radio to present-day downloading and live-streaming on the Internet, hopefully there's a little something here for everyone: an illustrated brief history of the words of country music, and the songwriters who created those words and made them sing.”

Book signings at the Country Music Hall of Fame and elsewhere had to be canceled because of the pandemic, but thankfully, we have the internet.

Here is a sample illustration. Can you guess the song? Hint: It's by Marty Robbins. 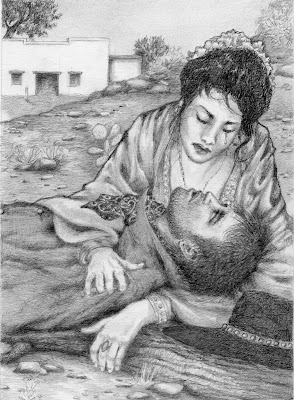 This is my last drawing, number 30, and for some reason, it was the hardest one. I thought I'd finish with the iconic Bob Dylan, whose timeless song, Blowing in the Wind, is so meaningful today, even though it was written 58 years ago. 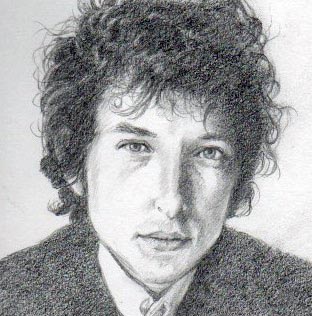 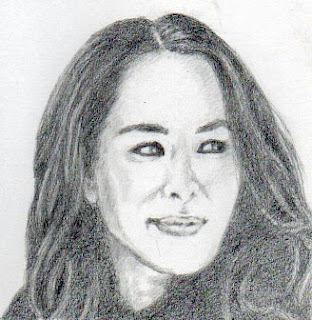 If you are a fan of home improvement shows, you will know who this is.

Carmen
Posted by Carmen Beecher at 8:45 AM No comments: 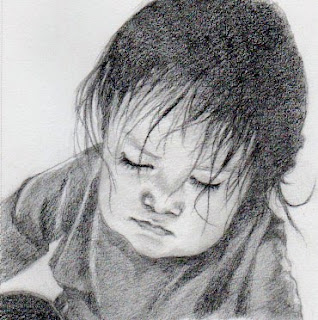 This is a little Navajo toddler. The Navajo Nation is in great danger from COVID-19, having more cases per capita than New York or New Jersey. Extreme poverty is a factor, with only 40% of residents having electricity and up to 30% lacking access to clean running water.

South Korea has sent 10,000 masks and other PPE to the Navajo, honoring their service as "code talkers" during the Korean War. Native American soldiers cleverly used their native language as code for radio transmissions for the American military.


Posted by Carmen Beecher at 1:04 PM No comments: 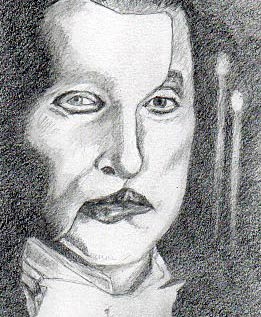 This is Michael Crawford as Phantom of the Opera, the very first Phantom. One thing I'll never understand is the makeup going to such great detail that he has one blue eye and one brown eye; how could a theater audience see that? I've seen the show three times. I'm one of those people they call a "Phan."

Posted by Carmen Beecher at 2:26 AM No comments:

Email ThisBlogThis!Share to TwitterShare to FacebookShare to Pinterest
Labels: drawing of phantom, michael crawford, phantom art, phantom of the opera, portrait of phantom, sketch of phantom of opera 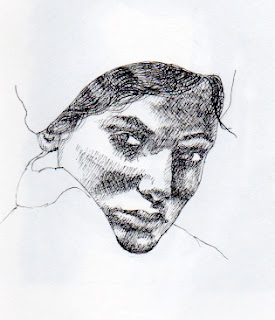 I just decided to do something different, pen and ink.

Carmen
Posted by Carmen Beecher at 2:03 PM No comments: 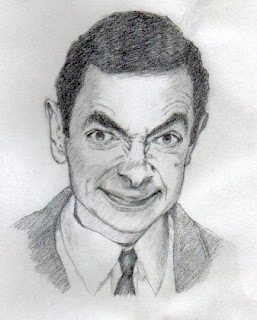 Time for me to lighten up, and Mr. Bean is always good for a laugh. I managed to spill water on my drawing before I got to the shading and the paper got wavy, but I like it.

Carmen
Posted by Carmen Beecher at 1:24 PM No comments: 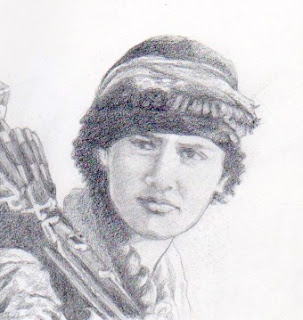 This young Kurdish woman was a soldier who lost her life fighting ISIS after the U.S. pulled out our military support for the Kurds. She was 19.

Carmen
Posted by Carmen Beecher at 1:51 PM No comments: 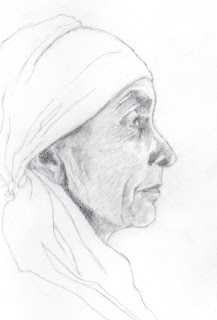 This is getting harder all the time, I think because life is starting to interfere. My to-do list is sneaking up on me. Anyway, here's Georgia O'Keefe. 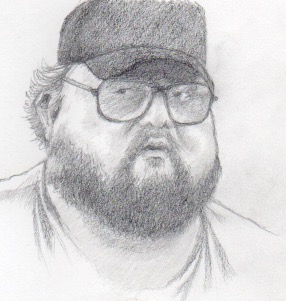 This is exactly how this man looks; I exaggerated nothing. What strikes me about him is his resemblance to Henry the Eighth. Henry also had tiny eyes, a tiny mouth, and chubby cheeks.

Carmen
Posted by Carmen Beecher at 6:48 PM No comments: 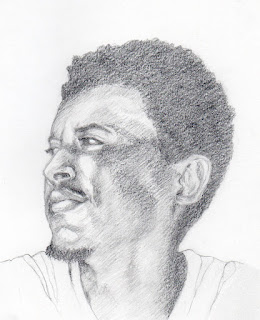 I just thought I'd try a little different technique.

Carmen
Posted by Carmen Beecher at 6:06 PM No comments:


Read more »
Posted by Carmen Beecher at 6:33 PM No comments: 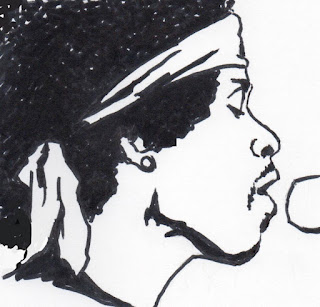 I actually have a busy day today, so I had to do something very simplified, another blast from the past.

Carmen
Posted by Carmen Beecher at 11:00 AM No comments: 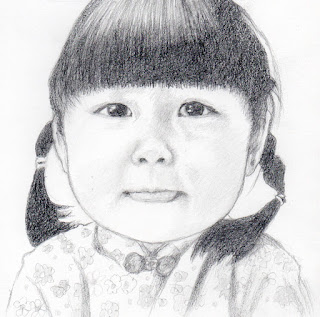 This little girl is so cute and so innocent. I hope you can tell that she is sticking her tongue out a little. It was so hard to draw that. Sometimes it's very difficult to figure out how to render what seems to be very simple.

Carmen
Posted by Carmen Beecher at 2:44 PM No comments: 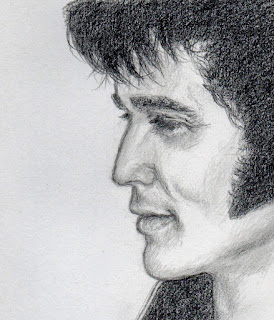 I still have the radio I first heard "Heartbreak Hotel" on. I was dressing for school, standing on the floor furnace in my grandmother's house, which was always freezing cold in the mornings (this was in Central Florida, before global warming). Most singers back then were not all that good-looking, so you can imagine the surprise for us teenage girls when we first got a gander at Elvis. 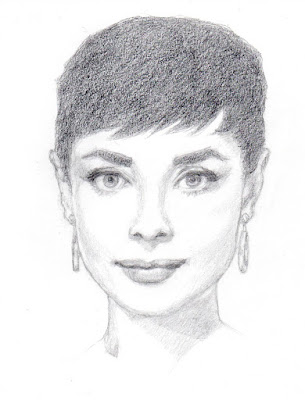 Audrey Hepburn, like Anne Frank, was in the Netherlands during the Nazi occupation. Her father deserted the family, and Audrey spent her teen years near starvation. Though both parents were Nazi sympathizers, she was a courier for the Dutch Resistance, delivering messages at great risk to herself.  She was a rebellious teenager doing the right thing.

Carmen
Posted by Carmen Beecher at 4:06 PM No comments: 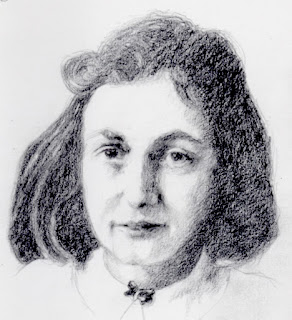 Anne Frank is a symbol of the nightmare of living in a fascist state. She and her family hid in an attic for 25 months, until the Nazis found them. Makes our quarantine seem pretty insignificant, doesn't it? Anne died of typhus in a concentration camp just before the war ended. This brilliant girl had just turned 15 when she wrote these words:

“In spite of everything I still believe that people are really good at heart. I simply can’t build up my hopes on a foundation consisting of confusion, misery, and death. I see the world gradually being turned into a wilderness, I hear the ever approaching thunder, which will destroy us too, I can feel the sufferings of millions and yet, if I look up into the heavens, I think that it will all come right, that this cruelty too will end, and that peace and tranquility will return again.” 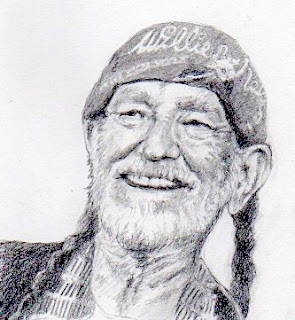 I'm taking a break from the sadness of social commentary and putting out a happy face today. Willie Nelson is 87 years old and still touring! When he sang, "On the road again" he meant every word! 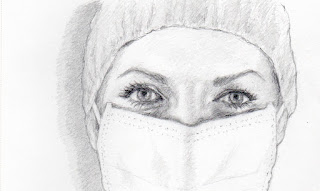 Yesterday I had a medical procedure and one of the nurses had the most astonishingly beautiful eyes. Of course, I was wondering if the bottom half of her face was just as beautiful. I'd like to think so, although if it was a Saturday Night Live skit, she'd remove her mask and have teeth sticking straight out and no chin.

This is not that nurse, but I wanted to salute the dedicated health care professionals who are doing heroic deeds these days. For those of us who like to whine about wearing masks, just think of your whole workday--sometimes very long hours--wearing a mask. It can't be easy. 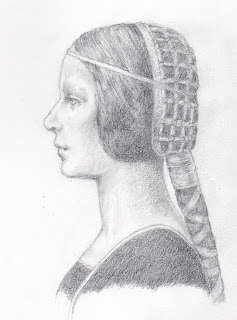 This is quite a departure. It's a drawing of a painting. It's called "La Bella Principessa" and it is attributed to Leonardo da Vinci, which is a way of saying it's debated about. The evidence does point to Leonardo and I'd like to think he painted it. What I don't like is that the owner has it locked in a vault. To me, this is more beautiful than the Mona Lisa and the world should be able to see it.