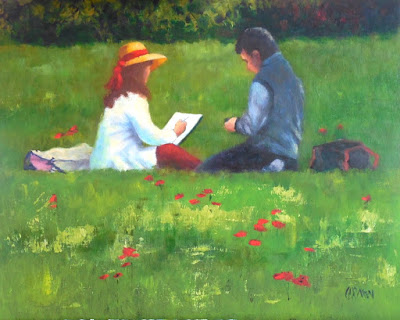 We were in Cheekwood Gardens in Nashville when I saw this scene. It made me think of the many Impressionist paintings I have seen of people sitting in gardens. Impressionists frequently made use of dappled shade in their art, but there wasn't any of that in this spot. The people were sitting in bright sunlight, and seemed a bit overdressed for the warm day.

Carmen
Posted by Carmen Beecher at 8:41 AM No comments:

All About the Clouds, 9x6 Oil Painting on Canvas Panel, Daily Painting Skyscape 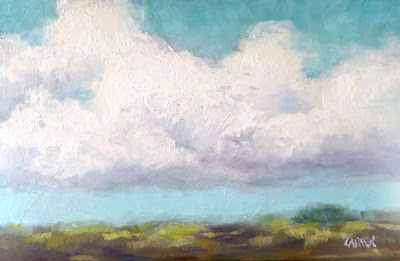 Where is the red, you ask? It's there, helping make the brown. It's also in the purple of the clouds.

Don't miss our group challenge on our blog on June 1st. It's very different from anything else we've done.

Carmen
Posted by Carmen Beecher at 12:30 AM No comments:

At the Movies, 30x40 Oil Painting on Canvas, Transformations Exhibit 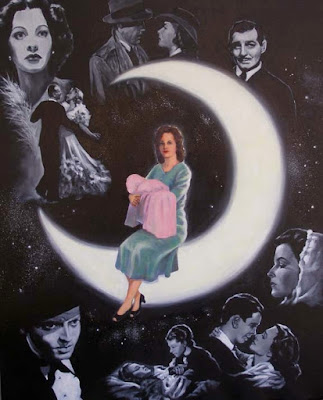 Several years ago I participated in an art show called Transformations, in which each team consisted of an artist and a poet who collaborated to produce a painting and a poem. It's amazing how well-paired each team was, because many never met before this project.

My poet partner, Jean Shepard, lives in Jacksonville, so we met in Ormond Beach to toss around ideas for our collaboration.  When I was born, we lived in an apartment inside a movie theater, and my father managed the theater. She was fascinated by the idea of living inside a movie theater. She wrote her poem from my father's perspective and also made interesting observations on time and motion. All of this gave me the idea for a painting with my mother in the center, sitting on a crescent moon, surrounded by movie stars.
Here is Jean's poem, "At the Movies."

Being two with the hope of three,
it was all they could afford,
an apartment above the cinema
where for hours each day he was a god
at work, turning day into night,
night into day with a flipped switch.
Where he revealed moments
snatched out of time
and run through a light
for believers who sat in silence below.
When two became three,
they ascended the narrow stairs
carried a pink bundle to an empty crib
watched with fascination
the arms waving, the legs kicking,
the unknowing, introverted face.
But others waited below.
He descended to darkness and the machine,
the sour smell of celluloid,
its tiny pieces of the past
curled on themselves like a  shell.
As he turned the switch on
and watched the relentless streaming
he suddenly saw how we move in the world,
how we run forward while
looking back over our shoulders
caught up in continuous flight.
Then he thought of the pink bundle above him,
the new skin, curled fingers,
the tiny feet that had not touched earth
and he was afraid.
Posted by Carmen Beecher at 5:50 PM No comments: 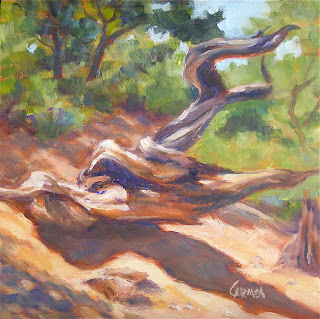 This tree was on a trail that goes up from the Airport Vortex in Sedona, Arizona. We walked the trail until it became so narrow and hazardous that we wisely turned back. The view was breathtaking, and so was the thin air. Below is my husband enjoying the view from the wide part of the trail. 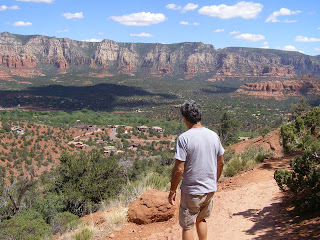 Posted by Carmen Beecher at 8:10 AM No comments:

I feel like writing about our trip to Nashville instead of promoting a painting, so I posted my past little painting of the front of Tootsie's Orchid Lounge. Tootsie's was a hangout of Patsy Cline, Willie Nelson, and George Jones, to name a few. Below is a picture of Hap taken this week in front of the same honky-tonk, camouflaged in his orchid shirt. 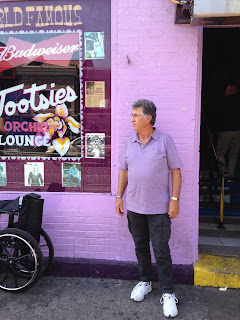 I used to spend summers in Tennessee, and when we sold our house in Knoxville I felt very sad, because Tennessee is in my blood. There is something about being where it seems that everyone is nice to you; there is comfort in the kind of Southern drawl that is like warm syrup surrounding you. It's very exciting to walk down Broadway and hear good music coming out of every doorway or big open window.

Is there a state more identified with music? Bluegrass, Country, Blues, Broadway and Beale Street. Graceland, for goodness' sake. I heard a country singer say that when she was a child she assumed everyone grew up like she did, with the whole family pickin' and singin' on the porch. Growing up like that would have made me want to stay home!

Of course, the first thing we did was go to the Grand Ole Opry, and that is always a hoot. We had lunch with songwriter extraordinaire Bobby Braddock and his lovely daughter Lauren, and I'm beginning to think he is the hardest-working man in show business, at least on Music Row. We are collaborating on a big project, which I will tell you about later.

We visited Cheekwood Gardens, and in the mansion's art gallery are two significant paintings contributed by Jamie Wyeth and Andy Warhol, who painted portraits of each other. Jamie's portrait of Andy is awesome, with the most intriguing skin tones and brush strokes. Andy's portrait of Jamie is a big blown-up photo with a lot of pink acrylic over the skin. Both are very arresting, but of course the one I couldn't take my eyes off was Jamie's portrait of Andy. The images below don't do either one justice. Jamie used a lot of green in Andy's skin and got a beautiful translucent glow. Unfortunately, the photos I found online make him just look creepy, and my closeup photo at right isn't great either, but you can see some of the beautiful skin tones. 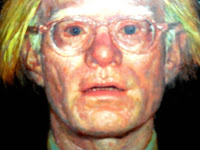 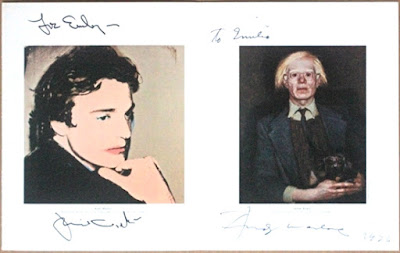 Posted by Carmen Beecher at 8:53 AM No comments: