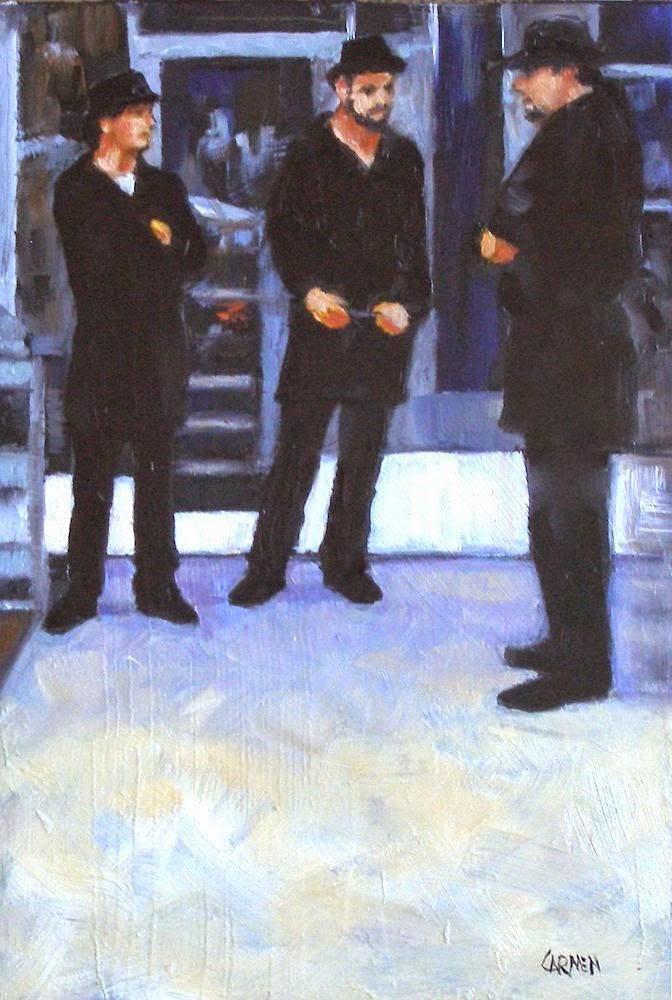 This place serves excellent Cuban sandwiches, hence the title...what did you think I meant?

Okay, I confess: this title was stuck in my head before I painted the first stroke, and nothing else worked. These guys were waiters in a South Beach Cuban restaurant and I loved their casual pose as they were awaiting the dinner crowd.

House on the Beach, 8x6 Oil Painting on Canvas Panel 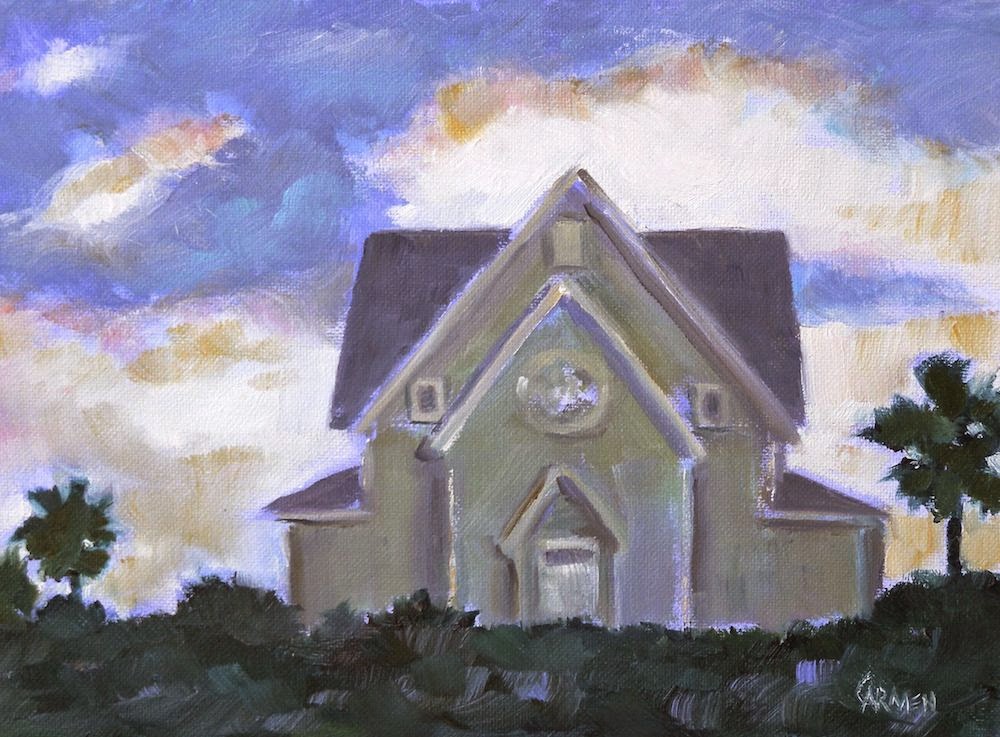 This is a red-letter day. I finally painted a painting, after three weeks of being unable to do so. Oh, Happy Day! I painted this from an iPhone photo my husband took while we were out for my therapeutic walk. The sun was setting behind us, giving the house an interesting color and tinting the clouds a bit. I've been thinking about that light for days, and finally felt up to painting it.

I got my copy of Carol Marine's book about Daily Painting, and it is even better than I expected. It is full of info about how to be a Daily Painter, and she includes her materials, tools, habits, and so much more. You can just feel her energy coming through the pages. It's beautifully written and beautifully printed, and I am so happy to have my little zentangle in it! Check it out at Amazon by clicking here.
Posted by Carmen Beecher at 10:25 AM 1 comment: 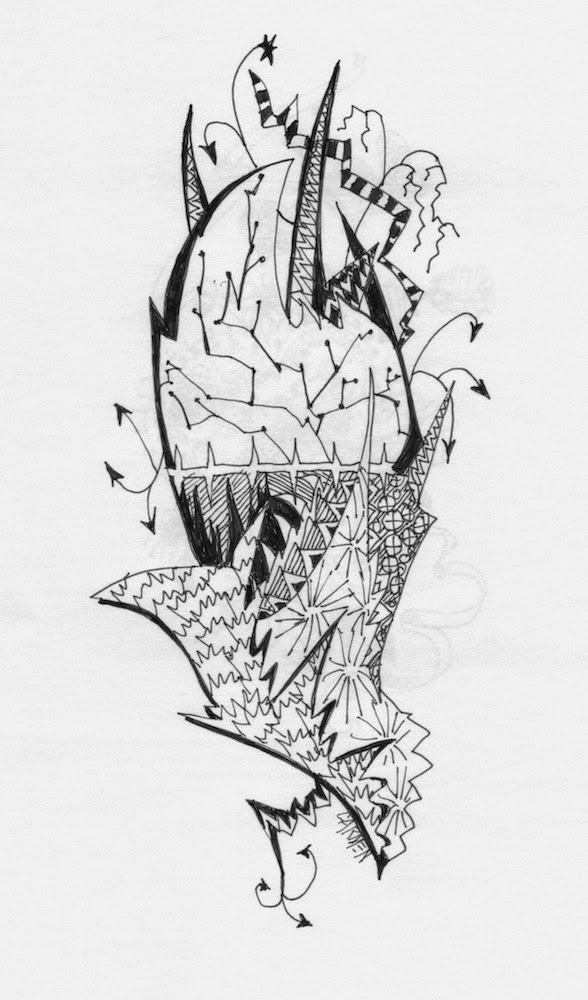 Since my surgery I have been trying to be inspired to do something artistic, yet nothing came to me. Then I realized that most thoughts have been about pain, so I decided to draw my perception of pain. It's jagged, it has little bursts now and then, it's sharp and pointy, and it's not pretty. I am not whining, because I feel I am doing very well and getting better each day. Over and over in my head Carly Simon is singing, "I Haven't Got Time for the Pain..."

I haven't put a price on my pain drawing, because who would want it? I don't even want it. Perhaps we shall have a ceremonial burning when the pain wears itself out.

Carmen
Posted by Carmen Beecher at 8:01 AM 3 comments: 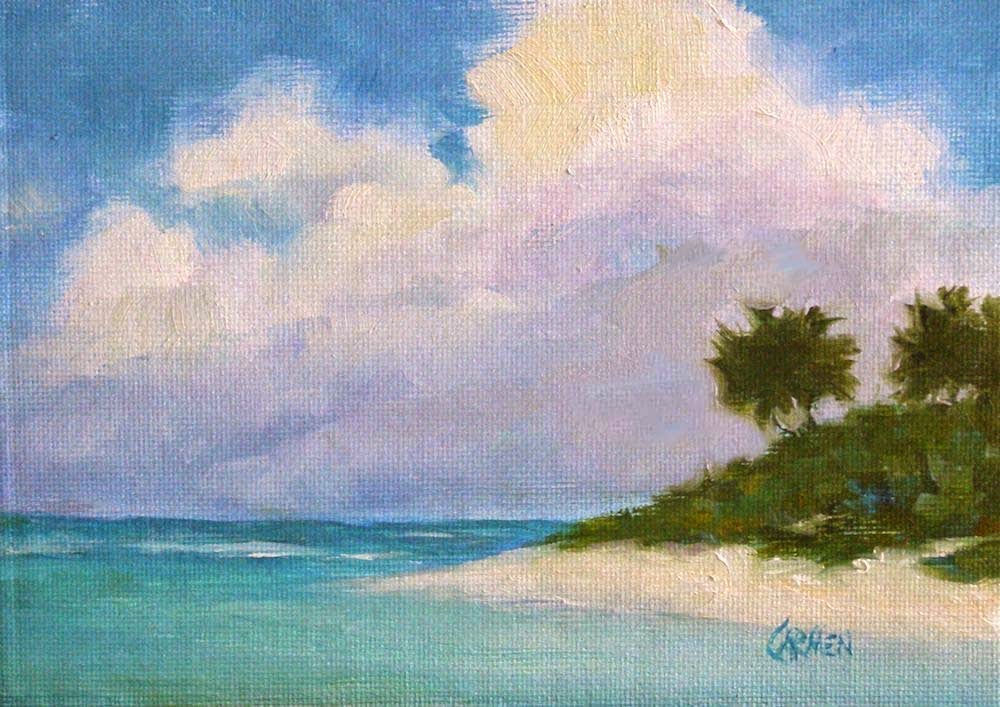 $89, Click to Purchase
Well, here's my idea of torture. I am laid up while healing from knee surgery, and when the TV is on, I hear the same political ads every few minutes. Here in Florida we have newsmen who do fact checks, and they report on the ads that are outright lies or smarmy half-truths. Even after the ads are shown to be untrue, they continue to play, over and over and over. This is how elections are won. Tells the same lies enough, until people believe them. If other products make false claims they can get yanked off the air. If those to whom we entrust leadership make false claims, we elect them. What kind of stupid system is that?

Okay, enough of a rant. My leg looks less and less like a zombie leg and my progress is good. I hope my brain comes back to life soon. Is it a contradiction to say I am concerned about my state of apathy? The only thing I'm not apathetic about is political ads.
Posted by Carmen Beecher at 10:02 AM No comments: 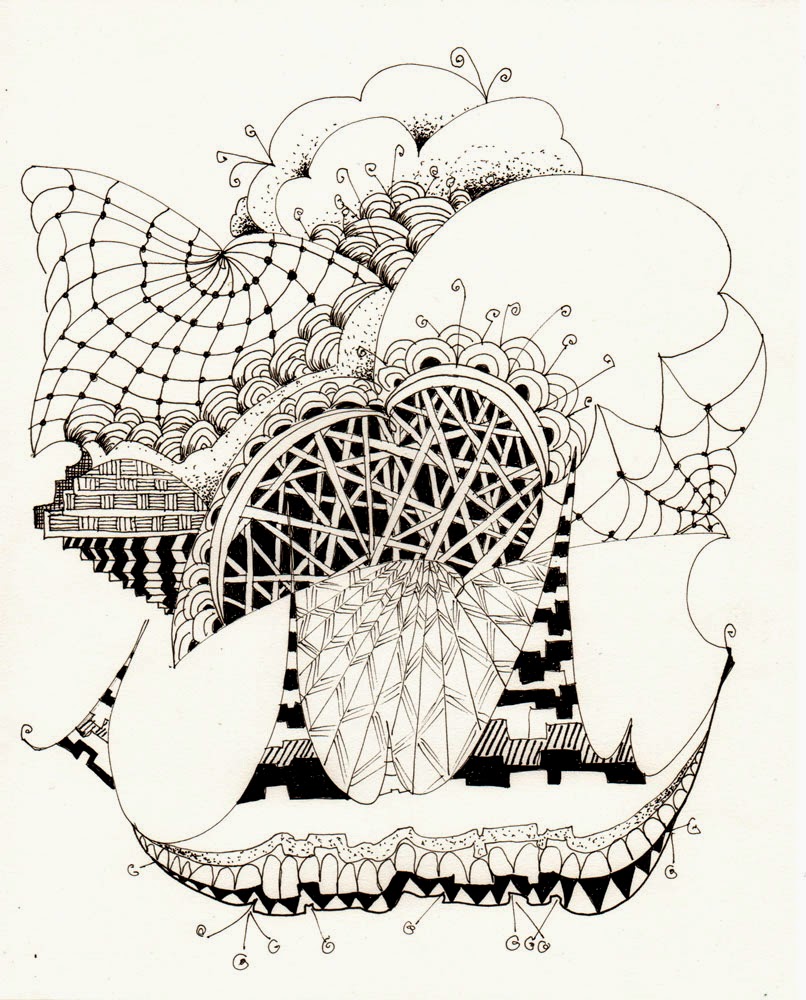 I am so happy to report that my zentangle drawing above is included in Carol Marine's soon-to-be-released book Daily Painting. Some of the most amazing artists are in the book, and I am so honored to be included! Release date is November 4th on Amazon, or you may pre-order now for a discount of about $8. Here is the Amazon link: http://www.amazon.com/Daily-Painting-Creative-Productive-Successful/dp/0770435335/ref=sr_1_1?ie=UTF8&qid=1412907428&sr=8-1&keywords=daily+painting

This is a really bright spot for me during what I call the Month of Worries. My loved ones have experienced eye surgery, knee surgery, bypass surgery, pneumonia, and blood clots. I myself am still recovering from my knee replacement and it is going well, so I have no complaints. The meds make me really stupid but that too shall pass. I hope.

Posted by Carmen Beecher at 12:05 AM No comments: 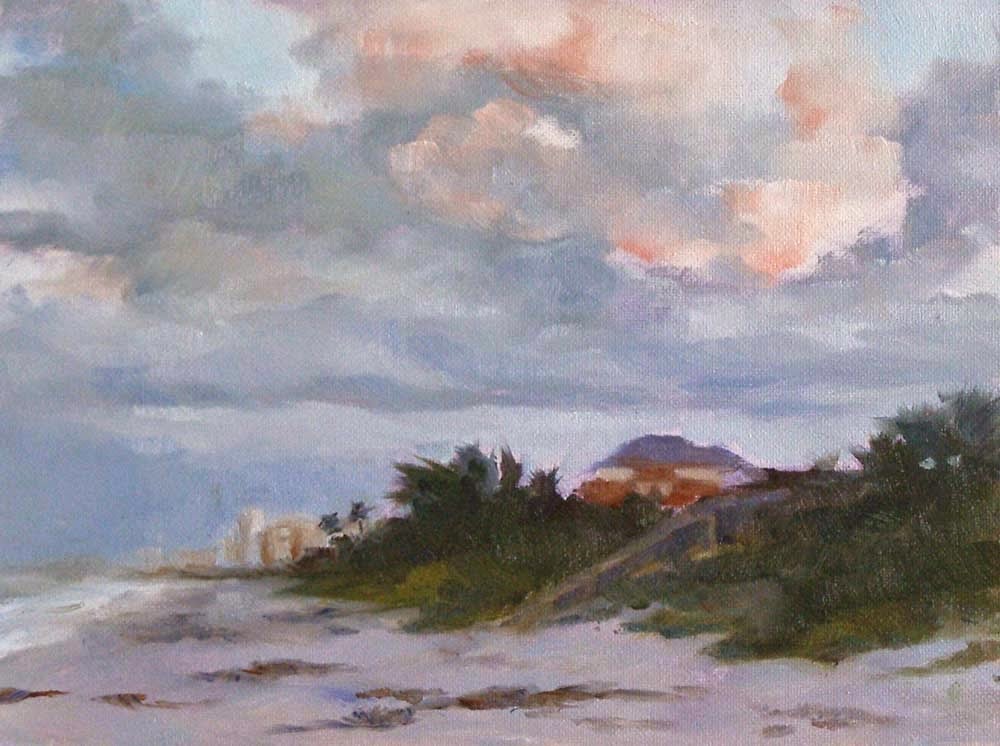 This is an original oil painting of Satellite Beach, Florida, 8x6, signed and ready to frame. The clouds have been so interesting here lately, because almost every day we get a big rainstorm. Prior to that we have beautiful cloud formations, and at sunset they are tinted with color. Even though the sun sets in the west, the clouds over our beach on the east coast are sometimes painted lightly with very beautiful pinks. 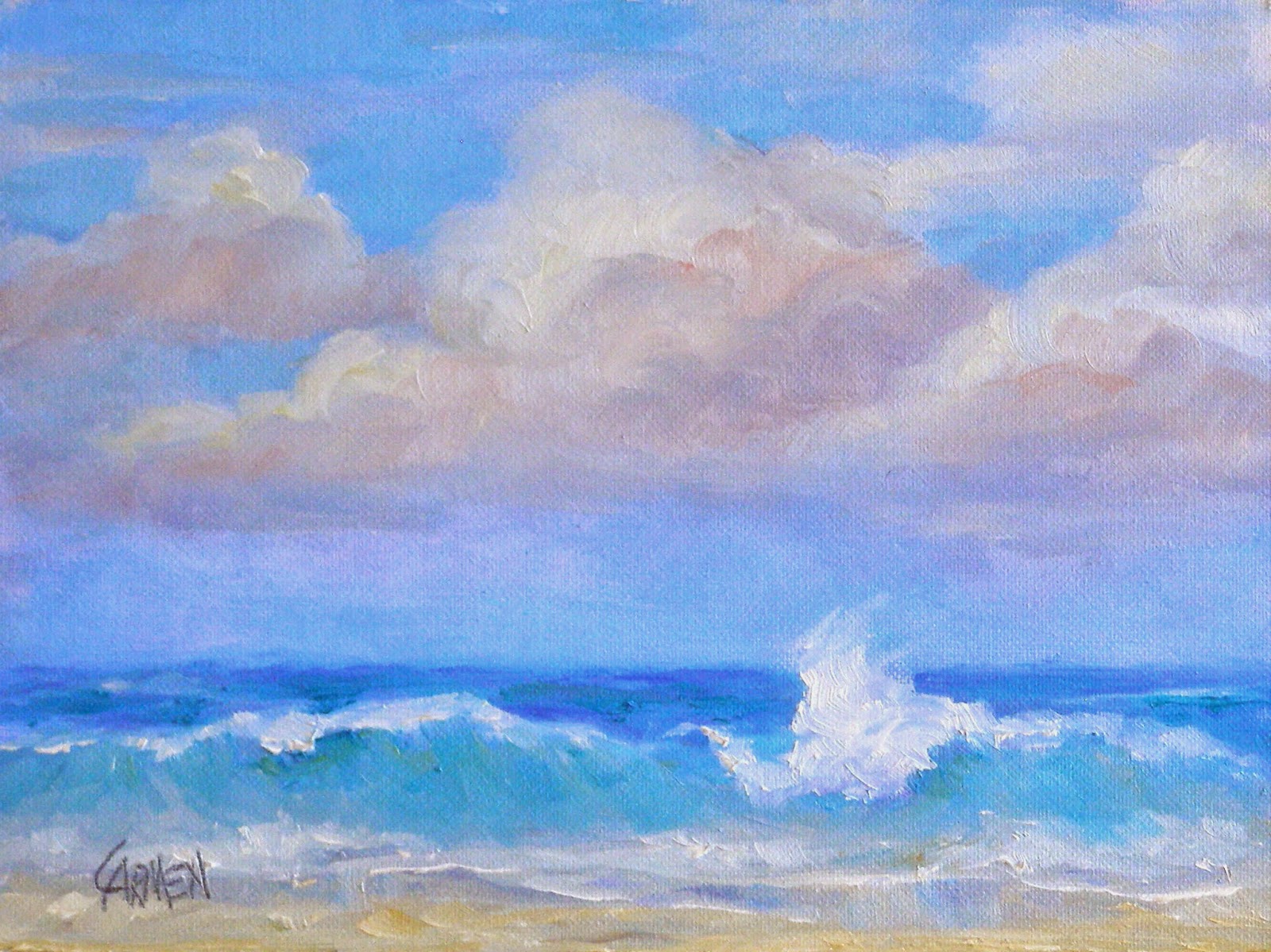 Every day I look at the news to see where the tornadoes, hail, flood and fire were yesterday. This has been an amazingly violent summer. Yet here in Satellite Beach, Florida, all is well. It's sunny in the morning and very rainy in the afternoon. I cannot complain, especially when I see scenes like this at the beach.

Carmen
Posted by Carmen Beecher at 12:05 AM No comments: