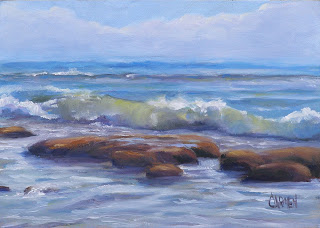 I'm so lucky to live near the beach. Of course, it's hurricane season and we are expecting eight-foot waves this week from hurricanes offshore, and we worry from August until December about being slammed again. I'll look on the bright side and get some good wave pictures to paint this week.

SOLD
Posted by Carmen Beecher at 5:00 AM 5 comments: 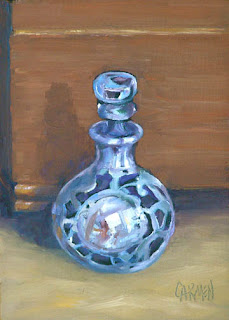 What a surprisingly different painting for me. It's a very classic still life, and I called it Self-Portrait because as I was painting I noticed my reflection. Can you see it? I have big windows in my studio, you can see them reflected too. I love this antique silver perfume bottle, a family heirloom. The stopper is stuck and it has perfume in it that probably dates to the 1940s.

BUY
Posted by Carmen Beecher at 5:00 AM 4 comments: 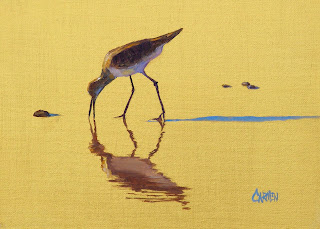 I really like the liquid reflection of the bird. The sand was wet, the water receding just as he was about to snag a tidbit for breakfast. I'm so lucky to live here. Convenient beauty is right across the street.

SOLD
Posted by Carmen Beecher at 5:00 AM 5 comments:

This Sun is Making Me Sleepy, 5x7 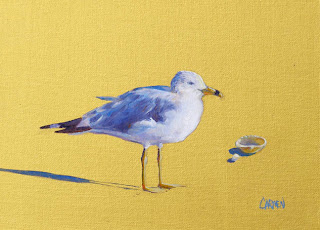 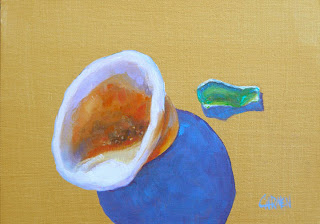 I finally spotted some sea glass for my Beach Treasures series on metallic gold. I used to collect sea glass when I lived in Bermuda. Pieces would wash ashore, the result of early settlers dumping used bottles. It's very hard to dig a hole in Bermuda, not much topsoil, so they just tossed them in the ocean.  Bottles found whole from the 17th century can be quite valuable. 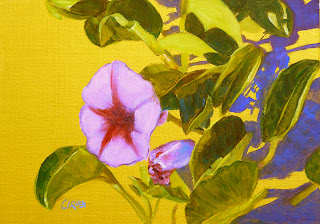 It's hard to believe that flowers can grow in sand dunes, but they do, and they perform a service. Our beaches have eroded so much from storms that anything that helps to anchor the dunes is a real beach treasure. I am trying to photograph these so that the metallic gold is obvious, but it is really difficult.

We Can See Right Through You, 5x7 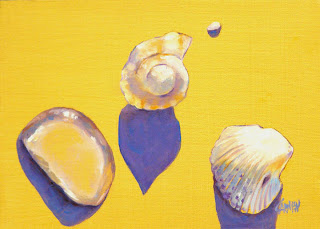 I hope you can tell the background is metallic gold. I wish you could see it in person, the gold makes it quite striking.
I think of the two haughty seashells looking at the jellyfish and accusing him of being spineless and transparent. It's a challenge painting a jellyfish, it's like a drop of water. This was late afternoon, and I loved the teardrop shadow cast by the middle shell. It was so hot, I thought maybe I would be cooler walking this morning and finding objects. Wrong. I have decided there is no "cooler." The heat is unbearable right now.

BUY
Posted by Carmen Beecher at 5:00 AM 3 comments: 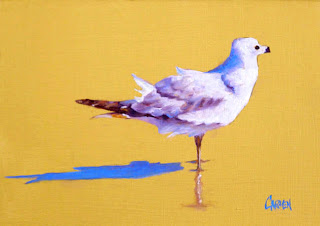 This Beach Treasure is a living one. Florida is hot, hot, hot right now, and I tried to convey the sunny look.

We just watched an amazing nine-year-old, Ethan Bortnick perform on PBS. He plays piano and sings every kind of music. It's so endearing to hear him sing, "...and I thay to mythelf...what a wonderful world..." Here's a link to his YouTube performances.

BUY HERE
Posted by Carmen Beecher at 5:00 AM 6 comments: 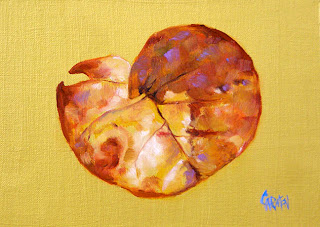 Another Beach Treasure, a sea grape leaf that was lying so perfectly on the sand. I like all the beautiful colors in it, and in fact, sea grapes can be so many different colors, but this is our "Fall" version. It doesn't refer to a season, it usually just means it managed to fall off the tree and turn brown.

Yesterday three of us took a day off from painting and went to St. Cloud, where we discovered a tea room that had exquisite food. We topped off a delicious meal with the best scones and Devonshire cream I've ever had. You never know what you'll find in a small town. Sometimes it's a little bit of heaven. 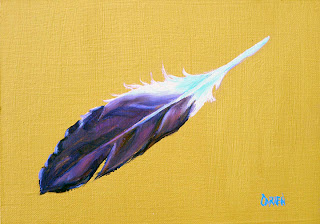 This is the second of my Beach Treasures on metallic gold background. Gold is a lot of fun to paint on.

Yesterday our DailyPainterOriginals.com group was trading tips, and in that talented bunch, there is a vast fund of knowledge to be shared. I made a document that is sitting on my desktop now with some very smart ideas from them. The wonderful thing about artists is that they share so willingly, and the Internet makes it so easy. I've never asked any artist a question online without getting a very helpful answer.  Artists are the most generous people I know. This is the first in my new series, Beach Treasures. There are so many beautiful things on the beach, perfectly displayed, and I thought such gems deserved a metallic gold background. I hope you can tell from the photo that the gold is metallic. Right now our weather is stormy, so I should find a lot more subjects washing up. Of course, I will have to throw some birds in too, I just can't resist them.
BUY HERE
Posted by Carmen Beecher at 5:00 AM 1 comment: 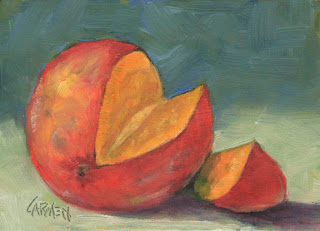 This mango came from my daughter's tree, and it was absolutely delicious. After I painted it I thought it looked like PacMan, hence the name. I probably looked PacMan myself while I was eating it, it was so good.

BUY HERE
Posted by Carmen Beecher at 5:00 AM 4 comments: 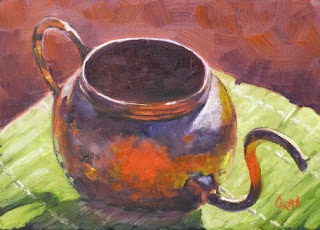 I put this little pot in the sun and captured the red reflections. Copper is always a challenge to paint. It reacts to its surroundings and picks up so many different and unexpected colors.

BUY HERE
Posted by Carmen Beecher at 5:00 AM 7 comments: 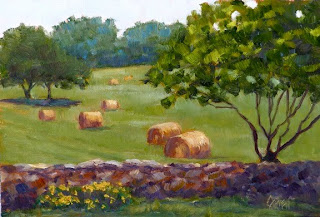 I just love Middleburg, Virginia. It's so picturesque and historic. I always picture Civil War soldiers hiding behind these walls. After all, this was the territory of the Grey Ghost, the famed John Mosby, who was a thorn in the side of the Union Army.

As to my question about what a group of manatees is called, my Maven friend Marjean wrote to say that they are just called a group of manatees, basically. They are fairly solitary, so just gather in informal groups. That's Florida for you--everything is informal here. Now where are my flip flops...? 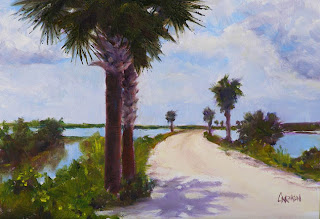 It's hot, it's bright, it's the Merritt Island Wildlife Refuge, and it's a beautiful place. We even found a spot where there was a whole group...? herd...? passel...? of manatees. 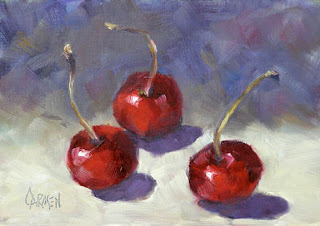 Cherries have a perky personality, don't they? They just beg to be painted.

I'm sitting here looking out the window wondering how we can be having such a drought while other counties in Florida are getting thunderstorms. And why is it that the weeds grow so well in a drought? It's supposed to feel like 105 degrees today, and those weeds won't care. It's a jungle out there.

BUY HERE
Posted by Carmen Beecher at 5:00 AM 4 comments: