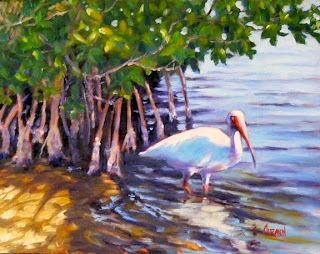 I can't get enough of birds and mangroves. Can you tell?

We got a Wii Fit Plus and I must say, it is an enjoyable way to exercise. During my first time using it I got hit in the head with soccer shoes, got lost on a bike, knocked over most of the flags while downhill skiing, and did just fine running, of all things. The graphics in the games are so darn cute, and who do we have to thank for that? Artists, of course!

SOLD
Posted by Carmen Beecher at 6:10 PM No comments: 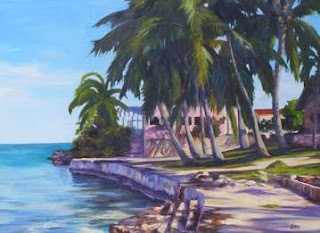 This old hotel on Elbow Cay in the Abacos is in a beautiful location, but abandoned. It took some serious exploring by golf cart (the mode of transportation on that little island) to even find it. It's such a gorgeous location, but every location on Elbow Cay is pretty gorgeous.
Posted by Carmen Beecher at 9:16 AM No comments: 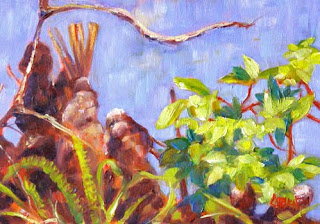 Cypress knees always make me think of my childhood in Central Florida. We not only saw them in nature, but our parents had lamps made of them. My Uncle Joe, who was a gator trapper for the state into his 70s, used to make cypress knee lamps. He was the uncle we would take to a swamp after dark, drop him off with his frog-gigging gear, and drive away. As a child, I found this astonishing. Actually, I still do.
Posted by Carmen Beecher at 3:23 PM No comments: 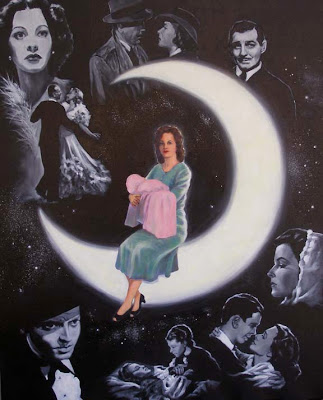 The Transformations event last night was a big success, standing room only. Each team consisted of an artist and a poet who collaborated to produce a painting and a poem. The poets' readings of their work just brought their words to life. It's amazing how well-paired each team was, because many never met before this project. Leave it to two members of the Pieces of 8 (Cindy Michaud and Denette Schweikert) and one Pen Woman (Fay Picardi) to pull off such an amazing event!
I stepped way outside my comfort zone for this painting, and it bears explanation. When I was born, we lived in an apartment inside a movie theater, and my father managed the theater. My poet, Jean Shepard, lives in Jacksonville, so we met in Ormond Beach to toss around ideas for our collaboration. She was fascinated by the idea of living inside a movie theater. She wrote her poem from my father's perspective and also made interesting observations on time and motion. All of this gave me the idea for a painting with my mother in the center, sitting on a crescent moon, surrounded by movie stars.

Here is Jean's poem, "At the Movies."

Being two with the hope of three,
it was all they could afford,
an apartment above the cinema
where for hours each day he was a god
at work, turning day into night,
night into day with a flipped switch.
Where he revealed moments
snatched out of time
and run through a light
for believers who sat in silence below.
When two became three,
they ascended the narrow stairs
carried a pink bundle to an empty crib
watched with fascination
the arms waving, the legs kicking,
the unknowing, introverted face.
But others waited below.
He descended to darkness and the machine,
the sour smell of celluloid,
its tiny pieces of the past
curled on themselves like a  shell.
As he turned the switch on
and watched the relentless streaming
he suddenly saw how we move in the world,
how we run forward while
looking back over our shoulders
caught up in continuous flight.
Then he thought of the pink bundle above him,
the new skin, curled fingers,
the tiny feet that had not touched earth
and he was afraid.
Posted by Carmen Beecher at 9:44 AM 1 comment:

These little guys were a side benefit of painting outdoors the other day. They stopped by for breakfast at the shore. 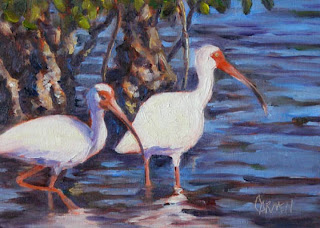 This weekend is the big event, Transformations, at the Brevard Art Museum. Twelve artist-poet teams will reveal their collaborative works. I will post mine here after the event. It's different from anything I've done, and it's called "At the Movies." 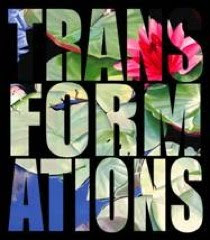 Posted by Carmen Beecher at 8:17 AM No comments: 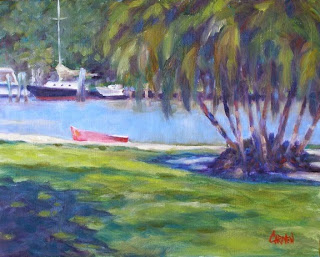 Finally got to do some plein air painting with my peeps. I repeated my mantra, keep it simple, keep it simple, and then some people pulled this little red boat on shore. So I went from just the palms, to the boat, to the background boats...and this is the result. Not so simple, but I like it. 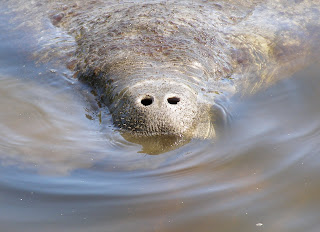 Here's why I like living here: a manatee came within two feet of shore and began munching on the slimy green stuff growing underwater. It looked a lot like our pool sweep in action. He was so unconcerned about us that I was able to get this lovely closeup. See the smile?
Posted by Carmen Beecher at 4:52 PM No comments:

Speaking of gardens, we worked in our yard yesterday. After not getting exercise since December when I got hurt, I must say it was not easy. For a small yard, we have a lot to weed, plus there is so much dead stuff now from the cold winter. I'm not complaining, though, because I was able to use both hands to pull weeds, and I am that much closer to my right hand being normal. 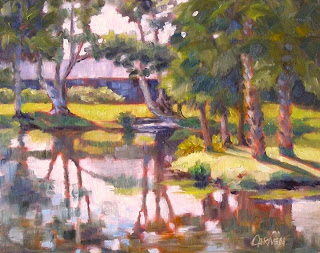 I wonder who decides what is a weed and what is a lovely addition to the garden? I have some white flowers that are Florida weeds from my childhood, but they are attracting honeybees, so why don't I just keep a few of them? Periwinkles are sold in garden centers now, and my father always called them weeds. Who is the Weed Decider, anyway?
Posted by Carmen Beecher at 12:04 PM No comments: 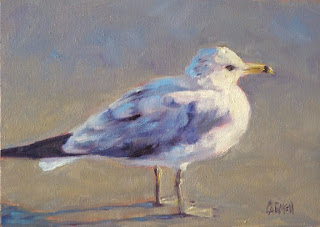 I've been having painting withdrawal, not being able to paint for a few weeks, what with other things happening, so today I finally got this one done. I also graduated from hand therapy, though it will be months before I'm "normal." I now have the ability to pull weeds once again. Oh, joy.
Posted by Carmen Beecher at 11:09 AM 1 comment: