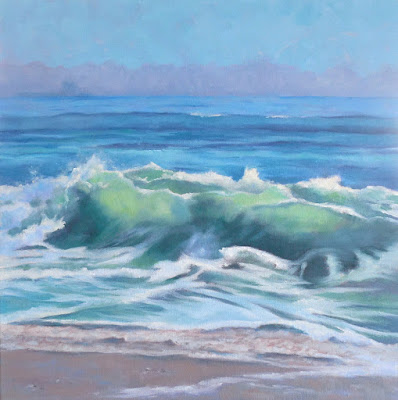 I love painting water, and I'm lucky to live by the ocean, because it changes daily. The form and the light in these waves were very exciting to paint. Whether still water with reflections or crashing waves, I just love painting water.

Save the Date:  On April 22nd I will be having a one-woman show in Middleburg, Virginia, that beautiful little historic town outside Washington DC. 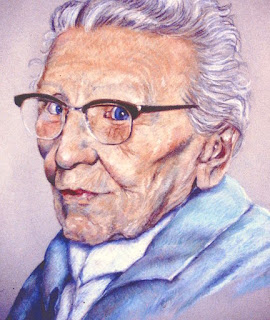 I have learned that lots of people, not just Opie, have an Aunt Bea. Mine was a corker. When she gave us stink eye we knew we were in trouble. She figures prominently in my book Crackers and Oranges. When my daughter Suzanne was a baby she fell asleep in her high chair with a pork chop in her hand and Aunt Bea said, "Hmph! She's faking it." Devious little baby.

This portrait was done years ago when I was dabbling in pastels. It's the only pastel I've ever posted on this blog. I do enjoy the medium, but I need to concentrate on my oil painting. I had a period of doing caricatures in pastel, which really worked for that medium. Let's face it, there are only so many hours in the day and so much energy I can expend, so I am working on the application of squishy oils on canvas, which I enjoy most of all. And the occasional collage. 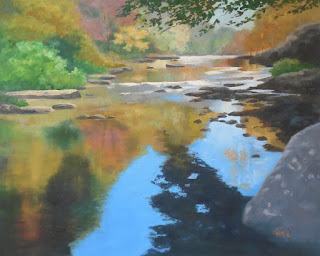 These reflections look like a patchwork quilt to me. I was near Boone, North Carolina and discovered this beautiful scene. I am painting for my exhibit in Middleburg, Virginia in the spring, and I want to have a good collection of landscapes. Middleburg is a lovely historic village set in Virginia horse country and I always enjoy visiting there. 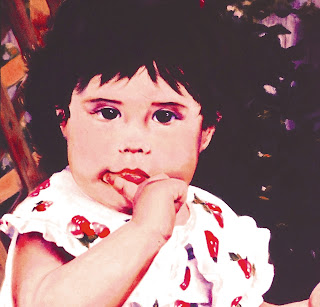 This is another blast from the past, my granddaughter as a toddler. She looks very serious, and no telling what was going on in that little head. She's the one who named me Bubba. 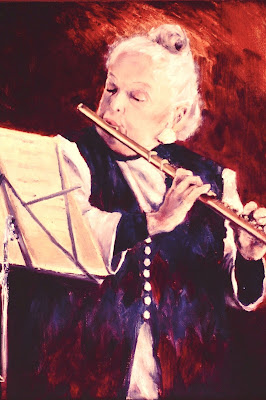 This lovely lady was a fellow member of the National League of American Pen Women, and she would treat us to beautiful music at our meetings. Hearing the music and seeing her playing her golden flute made her irresistible to paint. 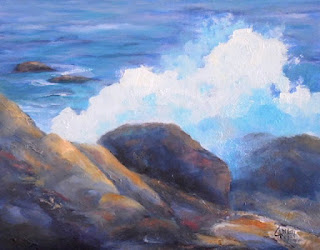 I can't believe my feet walked where Winslow Homer's feet walked, on the cliffs at Prout's Neck, Maine. What an exhilarating experience, and so different from our sandy Florida beach where few rocks can be found.

Lydia at a Tapestry, 24x18 Oil on Canvas, after Mary Cassatt 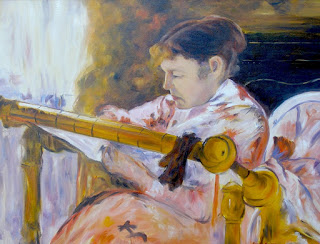 While reading about Mary Cassatt, I learned about her struggles as a female artist. She had to overcome the prejudice against women painters as well as the obstacles the Impressionists faced seeking acceptance as a new art form. She never gave up, but at a low period she was commissioned by the Archbishop of Pittsburgh to paint two copies of paintings by Corregio. He sent her to Parma, Italy, and at the time she wrote, "Oh, how wild I am to get to work, my fingers farely itch and my eyes water to see a fine picture again." (Spelling was not her strong point)

Her career continued to have highs and lows, and eventually she became a close friend and collaborator of Edgar Degas, who mentored and influenced her work.

Mary Cassatt was a feminist and supported women's suffrage; despite discouragement from her family and society she persevered and became one of the most well-known artists of her time. It's a familiar story of an artist bucking "the system" to achieve success.

The model for the above painting was Mary's sister Lydia.