Many years ago this artwork was stolen from the wall at Brevard Community College in Melbourne, Florida, where it was on display. I had worked so many hours on it, and it basically was a picture of tender subjects. In the center is my son at age four, and there is a butterfly on his chest. He was so delighted when it lit on him that I took his picture, and years later included it in this montage. All sweetness and light, yet some lowlife thief took it.

It occurred to me that now that we have the Worldwide Web, I can advertise my stolen artwork and maybe someone knows someone who has it...stranger things have happened.

I was reminded of this theft by our political sign being stolen from our yard last night, which involved trespassing on our property to get it. Same thing last election. Apparently someone doesn't have a full understanding of the First Amendment, or maybe it only applies to their party. 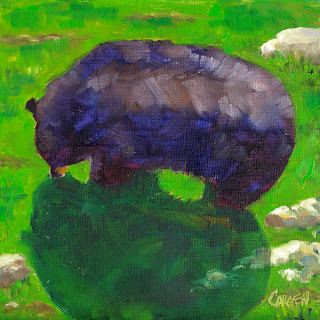 Aren't bears both cute and terrifying? Since there was a fence between the bear and me, "cute" applied. If no fence, "terrifying." I did meet a bear across a stream in the Smokies once. I was trying to take a picture of some rhododendrons, and he ambled out of the bushes on the opposite side of the stream. I did not stick around to get the bear picture, as we were in a convertible and a quick getaway was in our best interest. He didn't look at me in any threatening manner; in fact, he appeared rather bored with my appearance and just strolled into the stream as I was skedaddling away. "Skedaddle" is such as useful word for that sort of situation, isn't it? 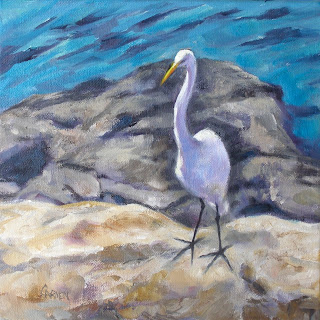 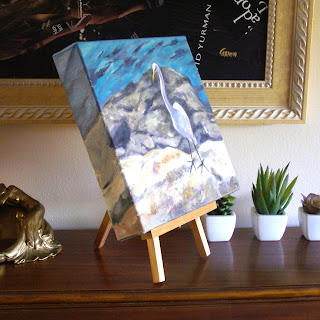 This bird looks like he's standing his ground, no matter what comes along. He's actually doing what all birds of his sort do, looking for fish. This is gallery wrap canvas, and all sides are painted.
PURCHASE

Posted by Carmen Beecher at 9:17 AM No comments: 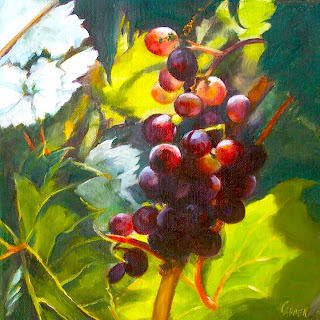 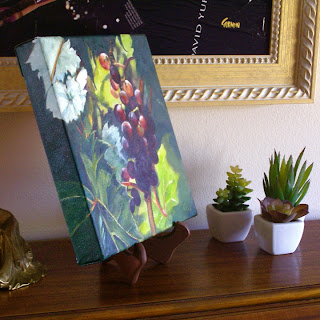 I'm so happy with this painting, because I see the light through the grapes exactly as I saw it in Grandfather Vineyard in North Carolina. I love grapes, whether they are on the vine, jam, juice, raisins, wine, or fresh at the produce market. Besides their deliciousness, they are wonderful to paint. And the seedless grape? What an agricultural achievement that was! 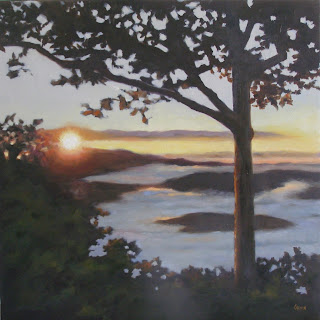 When the Pieces of 8 were in North Carolina, this is the sort of view that greeted us every morning from Cindy's balcony. I don't think I have done it justice. The mountains are like islands in the clouds.
SOLD
My good news: I am featured in an article in Space Coast Living Magazine, a beautiful local publication. Here's the link: Link to article
Posted by Carmen Beecher at 12:05 AM 2 comments:

The Cottage on the Hill, 8x10 Collage 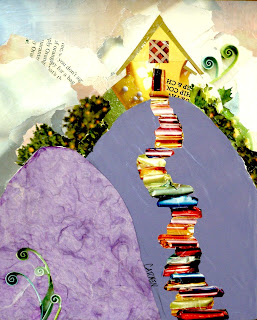 So every day the news is basically the same: a body is found, a car crashes through a house, an elderly person is lost, a bank is robbed, someone is bitten by a shark or an alligator. Well, maybe the animal bites don't happen every day, but the rest--yeah, pretty much every day.

When I am tired of all the tragedies, I like to retreat to my own little world, with purple hills and steps made of candy, out of reach of errant cars. A little whimsy is good for the soul.

Near the Falls, 8x10 Oil on Canvas Panel 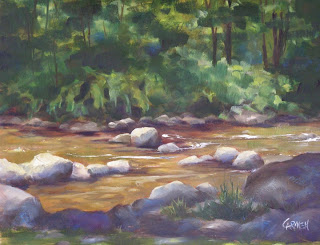 This is such a peaceful spot, the stream just trickling by. However, a few yards further down there is a spot that looks completely calm, even though it is a prelude to a huge waterfall. I feel sorry for the first person to ever discover this. Below is the waterfall, and if you look closely you can see two foolhardy youth who later jumped in. 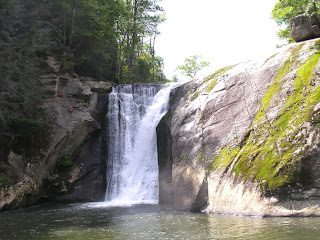 Posted by Carmen Beecher at 12:05 AM No comments: